Macy Anne Johnson
Rei Matsumoto is a human girl who Appears in episode 8 of the Konohana Kitan (anime). She is a one apperance episode character who runs into Yuzu. She is the girl Yuzu ran into on the Beach.

She has chestnut colored hair with light brown eyes and tan skin. She only wears a navy blue bikini and and navy blue shorts with three buttons.

Nothing else is known about her personality except that she is a girl who just wants people in her life. However this does not come true due to the fact she likes to make up stories in general and people realize she's lying.

Most of her Early life is unknown but by her first actions in the Episode she was known to lie. In truth she finds the real world dull. In fact Matsumoto, has been falling into depression, and lately she’s lacked the will to even go to school. Her classmate, Tanabe, has been worried about her, and came looking for her on this day to bring the handouts from class, only to find Matsumoto’s shoes sitting abandoned at the top of a cliff by the sea.

Yuzu had seen this human girl on a beach somehow and wondered if she is in Spring Blossoms's world or not. Curious Yuzu had went close to the girl to look at her but apparently that was too close as the girl woke up and freaked out Yuzu waking her up and she chased Yuzu until she fainted.

She apologized for chasing Yuzu and explained why she ended up on the beach as by the look of her apperance she looks like a shipwreck survivor. However this was told false because she has a way of making up stories like this. She then pulled the tail of Yuzu by accident thinking it was a prop of cosplay.

Later on she went on with her friend Tanabe a Yuzu left.

Rei lying on the beach

Rei about to Faint

Rei asking Yuzu about her tail

Rei with a friend 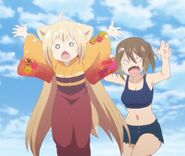 Rei chasing Yuzu
Add a photo to this gallery

Retrieved from "https://konohana-kitan.fandom.com/wiki/Rei_Matsumoto?oldid=643"
Community content is available under CC-BY-SA unless otherwise noted.